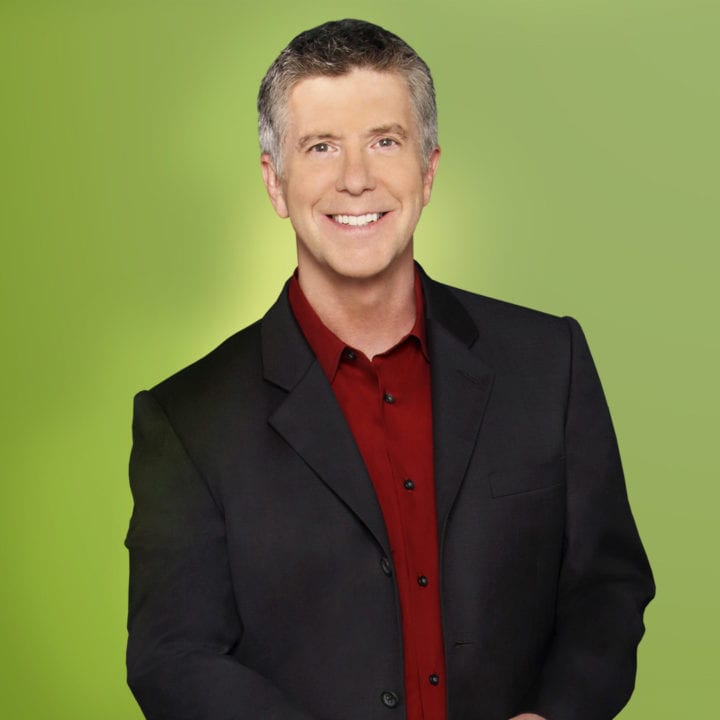 This week’s Halloween-themed episode includes Tom playing “Head, Gut or Groin?,” a boy asking why his plump grandpa has a baby bump, and a montage devoted to dogs wearing ridiculous Halloween costumes.

The video highlights in this season’s premiere episode include a little brother who causes a fiasco amongst his siblings when he flushes the toilet too soon during their goldfish burial; animals making bizarre and unexpected sounds; a music montage featuring people terrified on amusement park rides; the Ow-lympics; and “Delivery room fainters” vs. “Straws getting stuck in weird places.”

This week’s highlights include Tom playing “Who’s Makin’ That Racket?,” a package of kids saying hilarious things -- including a boy who has some choice words when he gets a Justin Bieber doll as a gift -- a bride and groom knocking down their wedding cake, and a kid removing his loose tooth by tying an anvil to it.

This week’s highlights include a family doing embarrassing things -- not realizing they are in front of a recording webcam -- a woman who discovers her hen has been trying to hatch light bulbs, Dog Park, and Tom playing “ Who’s Goin’ In?”

This week’s Halloween-themed episode includes Tom playing “Head, Gut or Groin?,” a boy asking why his plump grandpa has a baby bump, and a montage devoted to dogs wearing ridiculous Halloween costumes.

Highlights include a package of videos featuring people dressed as superheroes with super bad results, hilarious reactions of people learning their loved ones are pregnant, pets who can talk, and Tom plays “Pick the Real Video.”

Highlights include a woman finding half a $20 bill in her dog’s mouth, a music montage featuring wedding mishaps, a teen girl rambling on after dental surgery about how much she loves Prince William, and Tom playing “Who Breaks It?” The show will also award the Golden Cup to the one millionth groin hit.

In this $100,000 award show, the past six weekly winners compete for this season’s first $100,000 prize. The nominees include: “Hollow Tube Howler,” Saki the dog sounds more like a cow when he howls with a toilet paper roll in his mouth; “What’s not in your Wallet?,” a new dad discovers his 14-month-old son has been hiding his credit cards down an air vent; “Cinemadographer,” a dog runs off with a Flip Cam in his mouth while his owners give chase; “Pause for Applause,” a three-year-old recites her number flashcards and is convinced the number 11 means pause; “Great News for Great Grandma,” two women are ecstatic to learn they will be a grandmother and great grandmother at Thanksgiving dinner; “Sibling Shower Scare,” a brother puts on a mask and scares his younger brother while he’s in the shower.

This week’s highlights include a package featuring grumpy little dogs, practical jokes that backfire, a music montage of animals that look like they’re actually dancing, and Tom playing “What’s Makin’ That Racket?” with “Dancing with the Stars” judge Carrie Ann Inaba

This week’s highlights include videos featuring victims of wet willies, a round of “Name That Sound,” a bear breaking into a parked car and destroying the interior, and Tom playing “Too Far, Too Short, Just Right?”

This week’s highlights include a family that finds the TV remote they’ve been missing for weeks wrapped in a gift on Christmas morning, kids who get incredibly excited when they realize they’re en route to the beach, ladies who get hysterical after finding a live snake loose in their living room, a music montage featuring cats, and Tom playing “Say What?"

This week’s highlights include a dog completely mesmerized by an aquarium in a dental office, a man finding a squirrel has stored away hundreds of nuts in his golf bag, hilarious reactions by kids upon hearing they have a new sibling on the way, and Tom playing “Pick the Real Video.”

This week’s highlights include videos of a teen girl waxing her lip for the first time with hilarious results, a dog who foils his master’s plan to keep him out of the garbage, cooking mishaps, “People Getting Hit with Hammers Versus Dogs who Think they are Swimming,” and Tom playing “Kid, Cat or Canine?”

Doctor and a Wheelchair

This week’s highlights include videos of a determined teenager who repeatedly attempts a handspring with hilarious results, a package of cats and dogs making mischief together, a foolhardy doctor who tries to pop a wheelie in a wheelchair, and Tom playing “Head, Gut or Groin?”

In this $100,000 award show, clips include: “Ultrashocking Ultrasound,” featuring a woman’s stunned reaction when her ultrasound results, placed in her Christmas gift, reveal she’s going to be a grandmother; “Santa Calls,” in which a little girl thinks she’s talking to Santa on the phone but doesn’t catch on that it’s her father sitting right next to her on his cell phone; “Little Scene Stealer,” featuring two young sisters recording a video for their dad when the youngest decides to steal the spotlight; ”Kiss on the Commode,” in which a father wearing a scary mask wants to surprise his young son who’s using the restroom; “Nursery Rhyme Rewrite,” with a little girl recites Jack and Jill but replacing the traditional ending with her own -- in which Jill is ok; and “Fist Full of Follicles,” featuring a little girl singing “Twinkle Twinkle Little Star” and becoming annoyed when her baby brother tries to join in.

This week’s highlights include videos of a beach wedding proposal going awry when the happy couple is hit by a wave, a round of “Name That Sound,” a dog who has a hilarious reaction to a woman’s new engagement ring, a music montage featuring funny things that take place at the zoo, and Tom playing “Foot, Face, or Fanny?”

This week’s highlights include videos of a dog who can call his owner by his name, “Anthony,” a baby boy who springs a leak on his grandpa during his bath, music montages featuring dogs walking on two legs, funny babies, a marathon runner who surprises his girlfriend in the middle of the race, and Tom playing “Say What?”

This week’s highlights include videos of a little boy confessing to his mom that he said he was sick to get out of going to school, parents giving a little girl a pet hamster as a gift and being shocked when they discover it has had babies, a prank package of people getting sprayed by a kitchen sink hose.

This week’s highlights include videos of the funniest signs around America, mishaps occurring to people on crutches, a dog who has a hilarious reaction when little booties are put on him.

Salute to the Military

Presenting a “Salute to the Military,” this week’s highlights include a soldier surprising his girlfriend at a baseball game with his homecoming and a proposal, a Marine with an unusual way of cutting the cake at his wedding, a montage of dogs eating with human hands.

This week’s highlights include videos of a mom getting an unexpected reaction from her daughters when she tells them she’s pregnant again, a package of funny dog videos entitled “Dog Park,” an inventive wedding proposal by a man who sets up a fake arrest and gets handcuffed while his horrified fiancé-to-be looks on.

You Ate the Baby?

Amazing Spiderman,” featuring two terrified men screaming while trying to catch the biggest spider they’ve ever seen; “Accidental Cup Crime,” with a boy begging his mother not to call the cops after he accidentally steals a cup from a restaurant; “Backseat Sleeper,” featuring a toddler who tries his best to stay awake in the back seat of his dad’s car, but before his father can finish telling him it’s ok to fall asleep, the little boy is out like a light.

Resort in Florida. The makers of the season’s funniest video will take home this year’s grand prize, a vacation for four to the Walt Disney World ® Resort in Florida, where they’ll get to visit New Fantasyland™in the Magic Kingdom® Park, the biggest expansion in Magic Kingdom history.